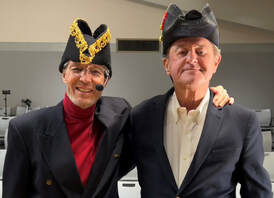 DAOR actors Vicki Beckerman, Lee Gale Gruen and Jean Wilcox are among those who will perform in “Voices from the Silenced,” a new play by DAOR members Martha Boesing and Victoria Rue. Other members involved in production are Mindy Zuckerman and Bobbi Ausubel. This remarkable theater piece was developed from letters written by women who experienced abortions prior to the Roe vs Wade Supreme Court decision in 1973.

These are harrowing tales that pull no punches. Directed by the authors, the play is being presented by the Giving Tree Club. There will be post-show discussions after each performance.

Boesing and Rue have long careers writing and directing in theater. Boesing was co-founder and artistic director of the Minneapolis-based women’s professional theater, At the Foot of the Mountain. She has written over 40 one-act and full-length plays. Rue’s writing and directing work have been seen in New York City and the West Coast.

Reservations are strongly recommended: emsmark@att.net, starting Jan. 18.
Admission is on a sliding scale from $10 to $20. Pay at the door. Individual seats are not reserved; it’s a first to arrive first choice of seats policy. Patrons are urged to please wear masks

Proceeds to go to Planned Parenthood of Northern California.
For more information contact: Mark at 925-330-4536
Encore Productions on YouTube
The Morini Strad
by Willy Holtzman

DAOR members Ed Kimak and Barbara Grant have recorded a full-length script-in-hand play. Zoom made this possible even though Barbara is now in Oregon, Ed is at Rossmoor, and their director Gary Green is in Berkeley.

The Morini Strad is based on the true story of violin maker/restorer Brian Skarstad’s stormy friendship with famed violinist Erica Morini in her final days. He repaired her Stradivarius, which was subsequently stolen in 1995 and not recovered to this day.

For a limited time you can view the play on YouTube:
https://youtu.be/rPReoE9WTd4
The Cuban Swimmer
by Milcha Sanchez-Scott

DAOR actors Lee Gale Gruen, Jon Rasmussen, Gail Wetherbee and Gay White and  director Gary Green have completed a six-month project to produce a Zoom recording of The Cuban Swimmer, by Milcha Sanchez-Scott. The 35-minute play, about a Latino family, is written in the literary style of magical realism.

Because the play involves much action and various sound effects, producing this script-in-hand performance was a challenge for actors working simultaneously in their separate homes.  The edited Zoom recording can be viewed on YouTube, at the link below.

On the same link are a number of shorter plays recorded this past December and January by several DAOR actors who worked with Gary Green.