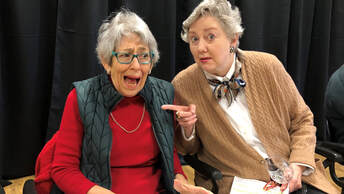 After three successful years as President of the DAOR Board, during which we saw the total upgrade of the Performing Arts Studio and enjoyed many great shows and classes, our  energetic and charming Tanc Agius has decided to step down.
​
Thank you, Tanc, for your years of service.

​Vice President Jon Rasmussen (right) will serve as President until the Board meets in January to elect new officers. 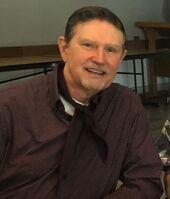 And thank you to Linda Kelp for her outstanding contributions to DAOR as long-time Artistic Director.
Call for Sound-Tech for Zoom Production
Contact:  Ed Kimak, 925-464-7692

DAOR’s Just-for-Fun Players is looking for a tech-minded club member to help add sound effects to a Zoom production of a radio play version of “It’s a Wonderful Life” to be presented later this month or early December. This holiday treat is well known and should attract a good audience.

To help the director and actors create a seamless production, this individual should attend rehearsals as well as the performance.  These are currently scheduled for 6-8 hours a week through early December.

If you (or anyone you know) is comfortable using Zoom, has a strong internet connection, is handy with a PC, able to commit to rehearsal times and---above all---is eager to learn something new, please call Ed Kimak at 925-464-7692. We promise a lot of fun and a terrific kickoff to this Holiday Season!

Because of the pandemic, DAOR’s Jean Wilcox Scholarship presentation to A.C.T. students was held via Zoom this year. Allen Darby and Breezy Leigh, the two recipients, joined us for a lively discussion on the challenges of studying acting and performing remotely. They pointed out the difficulty of timing, especially with comedy, when the other members of your cast are not in the same room with you.

Both Allen and Breezy expressed their deep appreciation for the scholarship awards, stating that it helped ameliorate additional expenses that they have had to incur due to having to study remotely.

The DAOR board of directors created the Scholarship for Theatre Arts in 2009 to honor Jean Wilcox, a founding member of DAOR and its first artistic director. She also served as its president from 2009 to 2011.

A native of England, where she received drama training at the London School of Drama, Wilcox immigrated to the Bay Area in 1962. She has received a Best Actress Shellie Award for her portrayal of the title character in Shirley Valentine. Under the auspices of the Walnut Creek Civic Arts program, she taught Shakespeare to incarcerated youth at Juvenile Hall in Martinez.​​

We regret to announce that Jean Georgakopoulos, one of our most prominent and beloved members, died on Friday, June 5. Both her sons Alex and John, daughter-in-law Michelle, granddaughter Olivia and grandson Jared were with her.

Jean came to California in 1956 and graduated from UC Berkeley in 1958. For eight years she was a stay-at-home mother to her two sons. When they were old enough to be more independent, she took a position as a student teacher at San Leandro High School. After a year, she moved to De Anza High School where she taught English and Drama until 1980. Then she moved to John F. Kennedy High School in Richmond to continue her teaching career. After five years, she moved to Administration in the Richmond Unified District until retirement.

On moving to Rossmoor, her passion for the dramatic arts was rekindled much to our advantage. She was one of the early participants in DAOR, teaching all aspects of drama from Beginning to Advanced, Scene Study and Directing. Although a superb teacher, she never lost the desire to continue to learn. She was a student in DAOR’s Playwriting class every session for semester after semester. One of her most joyous experiences was directing “Three Women,” featuring her own beloved granddaughter Olivia.

We are sad to announce that Bud (Daryl) Lembke died June 18, 2020, at the nursing facility where he was a patient for several weeks. Bud was 98. He leaves behind his loyal and loving wife Mary, daughter Nancy Brenn of Oakland, by his first marriage, and Nancy’s son Jon Lovett, also of Oakland.

Bud was a founding member of DAOR and originator of the very idea of a drama club in Rossmoor. As a life-long learner, he was the first member to sign up for Gary Graves’ playwriting class. He continued in the playwriting class year in and year out through Rod McFadden’s tenure as instructor. A number of Bud’s plays were produced by DAOR either as full productions or developmental readings. The last of Bud’s plays mounted by DAOR was “Arthritis Be Damned” about the tribulations, foibles, and antic behavior of some typical residents of a retirement community called Hartmoor.

Daughter Nancy tells us:
Bud “came out from Minnesota to Los Angeles, and met my mother, Marjorie Gill, at the Palladium there, and they were married for 26 years. He worked as a reporter for various newspapers, including the Press Telegram in Lakewood, the Los Angeles Times in Anaheim, Carmichael, and San Francisco during those years. (And I was born after 5 years and lived in Lakewood.) . . . During World War II, Bud was a Radio Gunner in a Flying Fortress in Italy.”
​
We will miss his reporter’s insights into the troubles of our times, his self-effacing humor, and, yes, his corny puns.

Memorial services for Bud are on hold for now, but those wishing to make a donation in his name may do so to the Mt. Diablo Unitarian Universalist Church (MDUUC), 55 Eckley Lane, Walnut Creek, CA 94596.
Wanted:  House Manager(s)

Naked Stage is looking for one or more individuals to help overseee key House Management functions associated with DAOR’s Naked Stage productions. This may be your chance to contribute to Rossmoor’s theatrical efforts in a vital and essential role, without which our curtain would never go up.

After providing outstanding support for our first four seasons, it is with great sadness we have learned that our current House Manager, Sandra Hawkins, will be moving on to explore new adventures.  We are looking for individuals who, as a team, and working with experienced DAOR members, will follow in Sandra’s footsteps.

The House Manager oversees those “front-of-the-house” volunteers and operations that are essential in putting on a Naked Stage production. These include ticket reservations and sales, ushering, and refreshments coordination. We need individuals like Sandra who are committed, well-organized, detail-oriented, and enjoy working with people.

DAOR seeks suggestions for plays to be considered for future Naked Stage productions.
Parameters:                 (some exceptions, such as Our Town)Please include a note explaining your choice. 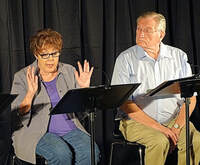 Enliven a meeting or program with a theatrical piece performed by our experienced actors. Funny or poignant, these scenes run about 10 minutes. There is no charge for this service, but requests must be made five weeks in advance of event.
Contact:  Gail Wetherbee
gcwetherbee@comcast.net
or  925-934-6896​
​Play Reading Groups
Ongoing
Third Monday monthly, 2 PM
Waterford small dining room
Contact:  Tanc Agius
t.e.alban.agius@gmail.com

(Note also:  Plays and books about plays are available in Dollar Clubhouse, short wall to right as you enter library room. ​Take advantage of this wonderful resource.)
DAOR Annual General Meeting
October each year
​
Election of officers and a preview of events ahead..
Play Submissions
Annual, Deadline to be Announced
Rossmoor Follies
October each year

The Performing Arts Guild of Rossmoor presents an evening of fun with performances by members of PAGR, including DAOR.
Holiday Party
December 3,  5 PM
Dollar Clubhouse
​Gathering of the Company
January each year

"The Company": Everyone involved in putting on a show, including playwrights, actors, directors, tech, backstage crew, publicity, house and ticket workers.  Join us for a review of the calendar for the new year, hear from class instructors, learn about new programs, play games, enjoy refreshments and visit with theater colleagues.
​All events take place at Hillside Performing Arts Studio
(Las Trampas), ​unless otherwise noted.